At our last board meeting, the CFEF made Bill Yancey a Trustee Emeritus.  A Trustee Emeritus status is a nonvoting position awarded to retired Trustees who have performed in an exemplary manner and deserve our utmost respect.  This blog will profile Bill’s impressive career and contributions to CFEF and the Cy-Fair community. 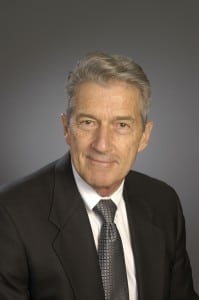 Bill Yancey earned a BS and MS from the University of Missouri.  After a short stint as an officer in the U.S. Air Force, as well as working in the aerospace industry in St. Louis, Orlando, and Southern California, he moved to Houston in 1967.  Bill’s first real estate experience came while at the Houston Post Newspaper assisting in the development of the “New” Houston building at the intersection of 610 and Southwest Freeway.

Bill started his own commercial real estate company in 1971.  Over the years, he developed and/or purchased a mobile home community, a number of office buildings, retail centers, industrial properties, and an upper-end gated housing community.  During the downturn of the market in the 80s, he developed a management and leasing division to service third-party owners.  The company maintained offices in both Houston and Austin for 37 years.

After selling the operating company in 2008, Bill now spends time doing personal investments and continuing to oversee the real estate investments that he still owns.  In his free time, he enjoys playing golf, sailing, and working out.  Bill was introduced, and joined the CFEF, in 1974 by Bill Nix.  Bill and his wife celebrated their fiftieth anniversary in 2012.  They have three children and four grandchildren.  All three of their children spent their entire school career in CFISD and graduated from Cypress Creek High School.

Bill will be moving to closer to home with his wife Connie.  We are grateful for the contributions Bill has made to the CFEF and our community.  Best of luck and we are honored to have you as a Trustee Emeritus!  To stay up-to-date on everything happening at the Cy-Fair Educational Foundation, make sure to follow us on Facebook, Twitter, Pinterest, and LinkedIn!  Today’s Students, Tomorrow’s Future!